As a precursor of several important neurotransmitters, tyrosine has potential brain stimulating effects, and it was shown that it enables better mental performance by facilitating focus and alertness, while reducing stress and fatigue. 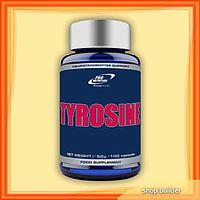 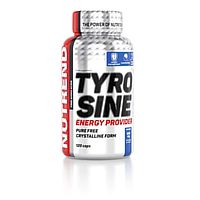 The body can also produce it (although only in very small amounts) from the essential amino acid phenylalanine.
It can also be found in nature in bananas, avocadoes or most high-protein foods including meat, dairies or eggs.

Why athletes use tyrosine

As an “antidepressant” amino acid, tyrosine is mostly used to enhance mood and brain functions. Some patients reported that they applied it with success to relieve the symptoms of stress and mental burnout. Strength athletes have also found it effective in enabling better mind-muscle connection.

How it enhances muscle gains and recovery:

How it supports brain function:

Tyrosine deficiency can cause the following symptoms:

Based on studies, tyrosine may be useful in the treatment of the following symptoms:

It was shown that tyrosine blocks the absorption of another amino acid called tryptophan, thus it stimulates the brain and can help prevent afternoon energy slumps. Theoretically, if you consume foods with high protein content or a tyrosine supplement 20-30 minutes before a lunch that is high on carbohydrates, you can prevent afternoon energy slumps and enhance your alertness for the rest of the day. Taken 30 minutes before workout, it can kickstart your brain, similarly to caffeine, but without jitters. According to the scientific theory, tyrosine supports mind-muscle connection and improves communication between the brain and the body, which has a direct impact on strength levels.

We all have to face stress every now and then. Some of us have to face it daily. If you feel you are losing mental control because of increasing everyday stress, it might be worth considering a tyrosine supplement, because tyrosine is a precursor of the three vital neurotransmitters: epinephrine, norepinephrine and dopamine. Animal experiments have shown that the level of norepinephrine drops in the body as the stress levels are rising. But tyrosine prevents the drop of norepinephrine levels even before stress appears.

It was shown that tyrosine is a powerful anti-stress agent for humans as well: an experiment was conducted among soldiers, and the subjects who took tyrosine did better at classroom tests, had less complaints and were much more alert. It was also shown that tyrosine reduces the stress experienced by many women at a certain time of the month: premenstrual syndrome (PMS). Tyrosine relieves depression and irritability, both of which are typical of this syndrome.

Tyrosine is also known as the “antidepressant” amino acid, and not without a reason. Since it is a vital compound for brain functions, it is used in clinical tests in the treatment of cocaine addicts or patients suffering from depression or anxiety.

Some studies revealed that subjects who enhanced their mood by amphetamines could significantly reduce the dose within a few weeks, by taking tyrosine. Orange juice boosted with tyrosine and other supplements relieved the depression and irritability that often go hand in hand with cocaine withdrawal. It was also confirmed by several other studies that tyrosine can be effectively used in the treatment of depression and anxiety, without the side effects of medicines used for the same purpose.

This vital compound is also the precursor of thyroid hormones and it can also stimulate growth hormone production. Furthermore, as a precursor of norepinephrine, tyrosine can also reduce appetite. And, since tyrosine plays a role in increasing dopamine levels, it might as well enhance sexual activity.

If you are an energetic person (maybe a little bit too much) with not much stress in your life, you do not need tyrosine supplementation. But for the rest it can help get their systems back to the optimal state of balance, to ensure better mental and physical performance.

Based on studies, 1 to 3 grams a day is the effective amount.

To ensure optimal absorption, take tyrosine on an empty stomach. If taken 30 minutes before workout, tyrosine can enhance mental focus and intensity during workout.

It was also shown that taken half an hour before meals it can effectively boost energy levels and reduce appetite as well.

Taken together with St John's wort, tyrosine can diminish symptoms of physical and mental burnout.

Not recommended for sufferers of high blood pressure or skin cancer.

Tyrosine is not recommended if you are on MAO inhibitors or other antidepressants, because these substances together may increase blood pressure.

Many bodybuilding articles begin with a detailed analysis of the anatomical and kinesiological relations of muscles, just to sound as scient...